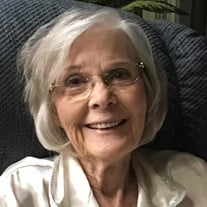 Betty Jean Brown, 86, of Marietta, went to be with her Savior after a prolonged illness on Friday August 7, 2020 in her home in Marietta, South Carolina. Surrounded by her husband of 58 years and her four children. Betty was born in Washington, Oklahoma on May 3, 1934. When she was seventeen years old, she gave her heart to Jesus. During her teen years Betty devoured books about missionaries and as she read their stories, she felt a stirring in her soul to do the same. Betty and Jim Brown were married on December 29, 1961 and soon after moved to Alaska to obey God’s call on their lives to be missionaries. Their ministry included administrating, teaching, and being dorm parents at a Christian boarding school for native Alaskan High School students. They would serve in Alaska for almost ten years before God called them to make a drastic move to California. They would continue their ministry to young people, as her husband took a Dean of Students position at a Bible School there. Betty taught students at the Bible School as well, along with caring for her growing family. Their mission has always been “to make disciples, who will go and make disciples”. They would continue this ministry in a different way, when they moved to Riverside, California and Jim took on a new role as pastor of a church. Life was filled with challenges, but God was faithful. They felt the blessing of the Lord on their life and ministry. In later years, they would serve as missionaries, once again, in Lawrenceville, Georgia, working in the home office of Biblical Ministries Worldwide. Betty followed Jesus for sixty-nine years. A lifetime of loving Him. The greatest gift Betty carried with her throughout those sixty-nine years was this: She knew deep down there was nothing she could do to save herself. It had all been done for her. Her sin was paid in full by the death of her precious Savior. He died so she might LIVE . . . and she did just that. The lives she touched and the impact she made for God’s Kingdom are like the ripples on a lake after a rock is tossed in, and will continue to be felt for many, many years to come. Betty has left an indelible mark on so many not because of who she was but because of what she allowed God to do in her. And now she is FINALLY HOME with the Savior she loved so dearly. Precious in the sight of the Lord is the death of his faithful servants. Psalm 116.15 Betty is survived by her husband, Jim. Her four children; Kristi Huseby, Karen Erisman, Karla Chun, and Kraig Brown and their spouses. Her sister, Carol Peterson and brother John Cypert. Thirteen grandchildren and one great grandchild. A Memorial Service will be held Thursday August 13, 2020 at 2:00 P.M. at Grace Church, 2801 Pelham Road, Greenville, SC 29615 In lieu of flowers the family requests donation to be made payable to Grace Church Travelers Rest and on the check memo line or in the comments box (if online) that the gift is "in memory of Betty Brown". Gifts will be used for the new Grace Church Travelers Rest building. Grace Church Travelers Rest Website: gracechurchsc.org Phone: 864.887.0745

Betty Jean Brown, 86, of Marietta, went to be with her Savior after a prolonged illness on Friday August 7, 2020 in her home in Marietta, South Carolina. Surrounded by her husband of 58 years and her four children. Betty was born in Washington,... View Obituary & Service Information

The family of Betty Jean Brown created this Life Tributes page to make it easy to share your memories.

Betty Jean Brown, 86, of Marietta, went to be with her Savior...