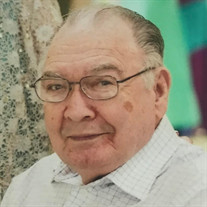 Mr. Billy Elwyn Powell, 85, of Travelers Rest, South Carolina, passed away peacefully on June 22, 2019, after an extended illness. Mr. Powell was born at home in Monroe, Georgia on February 1, 1934. He spent his childhood in Ninety-Six, South Carolina as the son of millworkers. At 7 years old, he traded his mandolin for a guitar and a silver dollar to a friend and that transaction began his lifetime passion for the steel guitar. He was a lifelong, self taught musician starting out touring with Snuffy Jenkins and The Hired Hands of Columbia, SC. He simultaneously began his Broadcasting career in Columbia, SC at WIS Radio and then later served in the US Army - working with AFN Broadcasting while serving in Stuttgart, Germany. After being honorably discharged, he continued his work in Radio and later became program director at WFBC. He dedicated much of his career to Radio and Television Broadcasting and retired from Leslie Advertising Agency in Greenville, SC. Mr. Powell enjoyed Fox News, Little Debbie Cakes, steel guitar and having his house full of his favorite people. He is the son of the late Katie Williams Powell and Willie West (Boonie) Powell. Mr. Powell is survived by his wife of nearly 65 years, Velma Lee Powell of Travelers Rest, SC; 2 Daughters Keely (Geoff) Drake of Conyers, GA, Lisa DeKalb of Travelers Rest, and Beverly (Larry) Hoyle of Newland, NC; 4 Granddaughters Leah DeKalb (Jeremy Adams), Lindsay (Ashby) Crow, Alissa (Harley) Ross all of Travelers Rest, SC and Katie Drake of Atlanta, GA; 2 Great Grandsons Ledger and Wilder Adams of Travelers Rest, SC. A Memorial Service to honor Mr. Powell's life will be held on Saturday, July 13th, at 11:00 AM, in the Scenic Hills Baptist Church in Travelers Rest, SC. The family requests in lieu of flowers to make donations to charity of your choice.

Mr. Billy Elwyn Powell, 85, of Travelers Rest, South Carolina, passed away peacefully on June 22, 2019, after an extended illness. Mr. Powell was born at home in Monroe, Georgia on February 1, 1934. He spent his childhood in Ninety-Six, South... View Obituary & Service Information

The family of Billy Elwyn Powell created this Life Tributes page to make it easy to share your memories.

Send flowers to the Powell family.