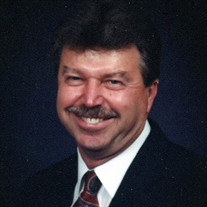 Bobby M. Safrit, 76, of Rockwell, North Carolina peacefully passed away Monday, February 17, 2020 at his home surrounded by his loving family and within view of one of his favorite sites, the sun setting over the family farm. Bobby was born October 23, 1943 in Rowan County, North Carolina to the late Homer Hulet and Mary Lee Propst Safrit. Bobby loved all things outdoors and believed in the tradition of valuing the people and gifts he was given. Many happy hours were spent working on the farm where he often put his engineering talents to develop ANYthing into good working order. He could often be found with his furry family friend, Duke, taking walks, chasing deer, playing with squirrels, and enjoying the ducks at the pond. In his latter days, his request was to return to his home overlooking beloved land where he recalled memories of showing cows and being awarded accolades for being the top milk producer in the county. Bobby found identity through hard work and perseverance with those cows and other farm related activities. Bobby graduated from East Rowan High School and attended Rowan Community College and Nashville Auto Diesel School. While in Nashville, he discovered a passion for antique cars which he shared with his sons, wife, and friends. Bobby was a committed advocate for Boy Scouting and earned his Eagle Scout Award. He was proud to share the rank of Eagle Scout with both of his sons and both of his grandsons. Like his father, Bobby continued to support scouting throughout his lifetime. The family farm often served as a camping retreat or fishing spot for many Boy Scouts and youth throughout Rowan County. Bobby’s work ethic was passed on including his never ending support of others led him to be instrumental in the formation and success of Bed Rock Construction and Bed Rock of the Carolinas with his sons. Leading by example, Bobby helped make these companies prosperous while also giving back to the communities they thrived in. Left behind to cherish his memory are wife Iris Faye Drye Safrit of 54 years; sons: Rob Safrit and wife Lisa of Greer, South Carolina and Ron Safrit of Rockwell; grandsons: Bryce Safrit of Greer, South Carolina and Brant Safrit of Clemson, South Carolina; four legged friend and companion, Duke; Sisters: Cathy Safrit Barringer (Randy) and Nancy Safrit Evans (Darrell) of Rockwell; Two nieces, two nephews, three great nephews, two great nieces; and countless friends and extended family who were lucky enough to have had Bobby’s humble influence and kindness in their lives. Bobby was preceded in death by brother, Homer Lee Safrit. The family will receive friends at Immanuel Lutheran Church on Friday, February 21, 2020 at 2:30pm. Funeral services will begin at 4:00pm with internment following. Pastor Bruce Sheeks will officiate. One of Bobby’s final requests was to return to home to enjoy the magnificent sunsets from his own back door. In the days ahead, remember the family and honor his legacy by smiling and appreciating the small things each day knowing those same sunsets are still being viewed by Bobby in his heavenly home.

Bobby M. Safrit, 76, of Rockwell, North Carolina peacefully passed away Monday, February 17, 2020 at his home surrounded by his loving family and within view of one of his favorite sites, the sun setting over the family farm. Bobby was born... View Obituary & Service Information

The family of Bobby Monroe Safrit Sr. created this Life Tributes page to make it easy to share your memories.

Send flowers to the Safrit family.