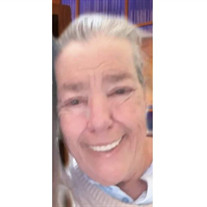 Brenda Carol Peterson went to be with the Lord on June 30, 2021. Brenda was born on July 5, 1947 in Charlottesville, Virginia. She was 73 years old. Brenda was the 4th child of 8 children to the late Catherine Frances Harper Conrad and the late Bud Benard Conrad, Sr. She is survived by siblings Danny Conrad, Sr., Shirley Wagner, Richard Conrad, Sr., and Kathy Griffith and late siblings Harold Conrad, Darrell Conrad and Bud Conrad, Jr. Brenda was married for 31 years to Dallas Peterson. She was the love of his life. They were the perfect couple joined together through the love of God. Brenda and Dallas had 6 children between the two of them; Harrison Tolley, Jr., John David Tolley, Neal Peterson, Johnny Peterson, Charity Peterson Campbell and Lori Conrad. There were many others that they looked upon as their own children also. Brenda had a heart of gold and loved all children and especially her grandchildren; Ashley Lynch, Courtney Fortner, Kailyn Mortensen, Eli Tolley, Alyssa Tolley, Justin Tolley, Jacob Peterson, Erin Peterson, nine great grandchildren and numerous nieces and nephews. As a younger woman, Brenda worked hard in the cotton mills. She also was a "woodchuck" cutting timber and making fire wood and later became a school bus driver for Greenville County schools for South Carolina. Brenda was a loving woman of God and loved everyone who she met. She was an anchor and a rock to many and will be greatly missed by all who dearly loved her. Brenda Carol Peterson will rest in eternal peace on the hilltop of Poplar at the Peterson Cemetery located at 3064 Poplar Creek Road, Poplar, North Carolina. Services to be held graveside at the Peterson Cemetery on July 8, 2021 at 2:00 PM. Pallbearers: Honorary Neal Peterson, Harrison Tolley, John David Tolley, Ricky Campbell, Frank Maybin, Tommy Harris and Paul Harris. Brenda wanted everyone to know, "I'm all right!" "Lovingly Submitted by the family."

Brenda Carol Peterson went to be with the Lord on June 30, 2021. Brenda was born on July 5, 1947 in Charlottesville, Virginia. She was 73 years old. Brenda was the 4th child of 8 children to the late Catherine Frances Harper Conrad and the... View Obituary & Service Information

The family of Brenda Carol Peterson created this Life Tributes page to make it easy to share your memories.

Send flowers to the Peterson family.