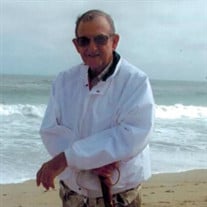 Duane Francis Corlett, 74, of Travelers Rest, SC. went home to be with his Lord and savior on Tuesday, April 13, 2021. Born in Kankakee, Illinois he was the son of the late Francis and Mildred Hartman Corlett. He was drafted into United States Army where he served proudly as a medic. Upon his return to the civilian world he worked as a construction supervisor, and also in the painting and roofing industries. Known as a jack of all trades, Duane could fix almost anything and was considered by all to have a green thumb and enjoyed gardening and working in his yard. Duane was recycling and composting long before modern popularity. However, his greatest passion was spending quality time with his family, especially his grandkids. He is survived by his beloved wife of 53 years Luann Corlett, sons Brian Corlett of Taylors, Duane Corlett II (Amber) of Sebastian, Florida and daughter Christy Corlett (Billy) of Travelers Rest, SC. His Grandchildren Jesiah and Kobe Corlett of Travelers Rest, South Carolina, as well as Hadley Corlett of Sebastian, Florida. Throughout their 53 years of marriage they opened their home to over 30 foster children. One of which was William Morris who also held a special place in his heart. In addition to his children and grandchildren, Duane is survived by his brother Dennis Corlett and wife Karen of Cape Coral, Florida, sisters Deborah Knauff of Spring Hill, Florida, Dawn Kingston of Port Richey, Florida, Darcy and Dean Johnson of Champaign, Illinois, Dena and Lew Taylor of Nashville, Tennessee Brother in laws Pete Knauff of Spring Hill, Florida, Aunt Maxine Mohr also of Spring Hill, Florida, Harry Hogan and wife Jeannie of Sun city center, Florida. As well as sister in laws Barbara Doncaster of Long Beach Island, New Jersey, and Lorraine Berrien of Hopewell, New Jersey. A Memorial Service will be held at a later date to be announced.

Duane Francis Corlett, 74, of Travelers Rest, SC. went home to be with his Lord and savior on Tuesday, April 13, 2021. Born in Kankakee, Illinois he was the son of the late Francis and Mildred Hartman Corlett. He was drafted into United States... View Obituary & Service Information

The family of Duane Francis Corlett created this Life Tributes page to make it easy to share your memories.

Send flowers to the Corlett family.