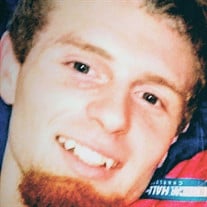 Dustin James Case, age 20 of Travelers Rest, SC, died in an officer involved shooting in Chester County, SC on February 27th, 2018 in the late evening. Dustin was well known and loved by many and would want as many to be named as possible. Dustin is survived by his daughter, Addison Nicole Case and her mother, Kayla Nicole Bowman. He is also survived by his mother Pamela Jean Goff and Father, Roy Michael Case, his brothers Brandon Ray Williams, Curtis Michael Case, and Randy Lee Mast; and his sister Michelle Bridges. Dustin is also survived by all four grandparents; Carolyn Brown and Howard Goff on his mothers side and Emily and Leroy Case on his fathers side. His surviving Aunts included Tammy Timmons, Angela Ballew and Sherry Case and his surviving uncles include Danny Holcombe, Ronnie Case, Clint Case and Danny Case. He had five nephews and one niece. Dustin had more cousins then one could count. Everyone that came in contact with him became family and someone that he would do anything for. Anyone who knew Dustin, knew that he put family over everything. His mama and his daughter were his whole world; and if it wasn’t right by them, he wasn’t doing it. If you were looking from the outside in, the best way to describe him would be misunderstood. While there may have been madness that surrounded his life there was always a method to it. For Dustin there was always intention for something better. Dying young is tragic and he had a full life ahead of him but Dustin lived more life than many. He was the definition of “YOUNG WILD AND FREE.” If you ask anyone who knew him, I’m sure they have a story to tell. The family invites everyone who has a story to tell to visit and say their goodbyes to Dustin on Wednesday March 7th from 12:00 pm until 2:00 pm at Johnson Funeral Home in Travelers Rest. Funeral Services will be held at 2:00pm in the Chapel with burial to follow at Mountain View Memorial Park. We will be allowing everyone to bring sharpies and paint pens to sign his casket. Wear what you would wear if he was alive and remember “He’s got this.” (Obituary written and submitted by the family of Dustin Case) Visitation: Wednesday March 7, 2018 12:00 Noon - 2:00 pm

Dustin James Case, age 20 of Travelers Rest, SC, died in an officer involved shooting in Chester County, SC on February 27th, 2018 in the late evening. Dustin was well known and loved by many and would want as many to be named as possible. Dustin... View Obituary & Service Information

The family of Dustin James Case created this Life Tributes page to make it easy to share your memories.

Send flowers to the Case family.