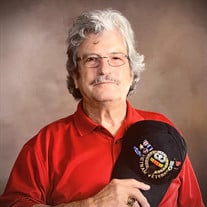 Harrison Blayne Darnell, Jr. was called home by his Savior on January 16, 2021 due to complications from the Covid-19 virus. He would have turned 76 on January 22nd of this year. He is survived by his son Deon, daughter-in-law Erica, and five grandchildren: Wyatt, Gabriel, Abi, Michael, and Fallon. He adopted Wyatt at the age of three. Blayne was the next youngest of sixteen children, all who have passed on, with the exception being Carroll who still resides in Marietta. He was also preceded in death by his wife Lucille, his daughter Michelle, and his infant grandson Asheton. The Lord sent a special friend to take care of Blayne and love him for almost the last 3 years of his life. She will miss him terribly. He is also survived by his three beloved fur babies: Scooter and two of her pups, Tater and PeeWee, all who miss him very much. Blayne proudly served his country in a military career spanning 33 years. He served in the Army as an infantry soldier, paratrooper, drill sergeant, and medic, with his final position being a Ranger out of Ft. Bragg, NC. During his second tour of Vietnam, his Cobra gunship was shot down, leaving him paralyzed from the neck below. With the help of some corpsmen in the military hospital, he learned to walk again and returned to duty as soon as he was able. He retired with the rank of Command Sergeant Major, having been awarded many medals and commendations for his impeccable service. Following his return to South Carolina, he was employed as a U.S. Marshall. In July of 2020, Blayne was awarded a handmade quilt from the Quilts of Valor Foundation. Blayne loved to garden, both ornamental flowers as well as fruits and vegetables. He especially enjoyed canning the fruits of his labors and gifting them to friends and family. Another of Blayne’s favorite activities was providing feeders for the many birds in the neighborhood. He loved watching them come and go, some even building nests, laying eggs, and raising offspring on the property. Decades ago when stationed in El Paso, TX he enjoyed building and racing race cars. He passionately poured many hours into this hobby, making him an incredibly skilled mechanic and auto enthusiast. This was how he met Lucille, who would prove to be the love of his life and mother of his two children. When his military career moved them to California, he spent his free time fishing and being out in God’s creation. During the last years of his life, he continued to immerse himself in nature by making several trips to Isle of Palms where he would sit on the beach and watch the ocean. He was especially amused by the sea gulls that would pluck Cheetos from his outstretched fingers. Blayne was one of the most generous and selflessly giving souls you could ever meet. He loved to spontaneously purchase a meal or a cup of coffee for people who might need a helping hand, and for fellow veterans to thank them for their service to our country. His love for the Lord was especially demonstrated in the way, in his kindness to others. He would be honored if you could do something similar and pay it forward, being a blessing to somebody else. We take great comfort in knowing that he is now singing with the angels. Blayne made many friends over the last several years. Their care and friendship is appreciated more than we can rightly convey. All of Blayne’s friends made a huge difference in his life and for that, we are ever grateful.

Harrison Blayne Darnell, Jr. was called home by his Savior on January 16, 2021 due to complications from the Covid-19 virus. He would have turned 76 on January 22nd of this year. He is survived by his son Deon, daughter-in-law Erica, and... View Obituary & Service Information

The family of Harrison Blayne Darnell Jr. created this Life Tributes page to make it easy to share your memories.

Harrison Blayne Darnell, Jr. was called home by his Savior on...

Send flowers to the Darnell family.