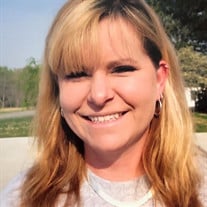 Jennifer Lea Bearden (Hawkins) left this world on February 4, 2018, having been cast by her favorite director, God, for her final starring role. It is certain that she will win a celestial Academy Award for the hauntingly, understated, breathtaking beauty of this portrayal of the fragility of what it means to be human. The viewers are left in an array of emotions, that promise to linger long after the final credits have rolled. Jennifer was born in Tampa, Florida on June 9, 1974. She was an only child by birth, but was beloved by her uncles like a pesky little sister. She gained a lifelong sister when she was 4 years old, a friend from daycare who became a part of her family. All of her life, Jennifer loved to dress up. One Christmas, when she was about 5, her Big Mama sent her the red velvet dress that she had asked for, along with her other request, a pair of cowboy boots. When getting dressed to take a Christmas picture, she refused to put on the patent leather shoes and insisted on wearing the boots with her dress. And that’s how she lived her life, coloring outside the lines. P.S. The boots along with her, went into timeout when she applied the toe of one to her mother’s shin after being asked to remove them for bedtime. She was a firecracker. Jennifer was an amazing, loving, beautiful human being. Her laughter could light an entire stadium. Oh, she loved those Clemson Tigers too. And because of her mama, the Florida Gators. While not a South Carolinian by birth, she loved the state like a homeland. She was passionate about the movies, Hope Floats being her absolute favorite. But more than anything, she loved her two children with every single fiber of her being. Jennifer struggled with PTSD, severe mental illness and addiction for much of her life. She had a hard start in life, between genetics and a family that at times would have given the Gallagher’s of Shameless a run for their money. She wanted with everything in her to be well, she fought valiantly to survive, but it was more than she could surmount on her own. Her death is a testament to the continued failure of this country as a whole to care for its most vulnerable. The access to and the potential for healing was measured in dollars far beyond the reach of herself or family. Her favorite quote was by Dr. Martin Luther King Jr., “You can’t stop the birds from flying over your head, but you can stop them from building a nest in your hair.” Jennifer is deeply mourned by her surviving family members. Her mother, Randi M. Romo, her daughter, Devon Lane Angeles and her wife Maria Angeles, her son, John Henry Hawkins III, her great-grandparents, Margarita Romo and Bruce L. Edwards, her beloved uncles and their families, David Bearden, James Bearden, Jeremy Edwards, Jonathon Edwards and Bruce Edwards and her sister, Mika Moses. The sunlight will never feel the same, the dark will whisper her name and our souls will always feel the ache of this missing. With all of our love, until we are reunited on the other side sweet Baby Girl 1.0. Visitation will be Monday, February 12, 2018 from 1:00pm - 2:00pm. The family will receive friends at that time. Funeral Services will immediately follow at 2:00pm in the Chapel. Burial will take place at Mountain View Memorial Park, Travelers Rest, SC.

Jennifer Lea Bearden (Hawkins) left this world on February 4, 2018, having been cast by her favorite director, God, for her final starring role. It is certain that she will win a celestial Academy Award for the hauntingly, understated, breathtaking... View Obituary & Service Information

The family of Jennifer Bearden (Hawkins) created this Life Tributes page to make it easy to share your memories.

Send flowers to the (Hawkins) family.