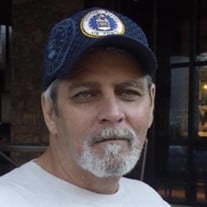 Jimmie Ivo Mahaffey, 69, of Greenville, SC passed away Wednesday May 6, 2020 at his residence. Born in Spartanburg, he is the son of J.C. Mahaffey and Daisy Mae Mahaffey (née Roberts). A veteran of the United States Air Force, he later worked as an automotive mechanic. He was preceded in death by a son, Keith Mahaffey; his parents, J.C. and Daisy (née Roberts) Mahaffey; a sister, Frieda Mahaffey and two brothers, Billy Mahaffey and Robert Mahaffey. He is survived by his daughter, Brandy (Rusty) Schmitt of Swansea IL; and son, Jimmie (Justice) Mahaffey of Easley SC; and their sister, Tiffany Harris of Shawnee, OK. A sister, Alice Bowers of Greenville SC, and a brother, Richard (Sandi) Mahaffey of Easley SC as well as a life-long friend and the mother of his children, Linda (Norma Cox) Whipkey. In addition, he is survived by five grandchildren: Zachary Lautz of Okawville IL; Courtney Reese, USN of Norfolk Naval Station,VA; Matthew Burnham, USMC of Cherry Point, NC; Brendan Bovay of Swansea IL; Rhiannon Bovay of Swansea IL and their cousin, Stephen Harris of Greenville SC Two great-grandchildren: Marceline Lautz of Granite City, IL and Oliver Crane of Okawville, IL; as well as numerous nieces and nephews. A "Limited Access" Visitation will be held Friday, May 15, 2020 at the Funeral Home from 12:00 Noon to 2:00 PM. Burial will be in the M.J. Dolly Cooper Veteran's Cemetery in Anderson at a later scheduled date. IMPORTANT NOTICE TO PUBLIC: *PLEASE BE ADVISED THAT DUE TO CURRENT PUBLIC HEALTH REGULATIONS AND OUT OF AN ABUNDANCE OF CAUTION, ACCESS INSIDE WILL BE STRICTLY LIMITED TO (10) PERSONS ENTERING THE BUILDING AT ANY ONE TIME. WAIT TIMES WILL OCCUR. SOCIAL DISTANCING WILL BE OBSERVED. THANK YOU FOR YOUR UNDERSTANDING DURING THIS DIFFICULT TIME.

Jimmie Ivo Mahaffey, 69, of Greenville, SC passed away Wednesday May 6, 2020 at his residence. Born in Spartanburg, he is the son of J.C. Mahaffey and Daisy Mae Mahaffey (née Roberts). A veteran of the United States Air Force, he later worked... View Obituary & Service Information

The family of Jimmie Ivo Mahaffey created this Life Tributes page to make it easy to share your memories.

Send flowers to the Mahaffey family.