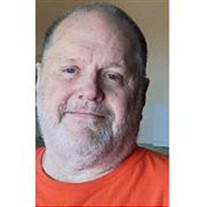 Johnny Marion Coggins, Jr., known to some of his family and friends as “J.J.”, went home to be with the Lord on July 1, 2021, at his home in Duncan, South Carolina. Johnny was born in Abbeville, SC, on April 16, 1960, to Johnny Marion Coggins, Sr. and Gwendolyn Faye Brown Coggins. Johnny is married to Kathleen “Kathy” Lynn Coggins. They just celebrated their 8th wedding anniversary on April 13, 2021. Johnny was a resident of Greenwood, South Carolina for many years. He worked at Ascend Performance Materials - Manufacturing Plant in Greenwood, where he retired after 35 years of employment. Johnny and Kathy attended New Spring Church in Greenwood. After, Johnny and Kathy moved to their home in Duncan and during the COVID-19 outbreak, they enjoyed watching Spartanburg First Baptist Church’s live broadcast together at their home. In his spare time, Johnny enjoyed vacationing with his wife, Kathy, in Myrtle Beach (where they were married). His favorite pastime was watching sports on television, with his best friend and brother from another mother, Marshall D. Richard. He especially loved to watch his favorite football team the Clemson Tigers. Johnny also loved spending time with his family and friends. He was predeceased by his parents, Johnny Marion Coggins, Sr. and Gwendolyn Faye Brown Coggins; and his son, Johnny Marion “Tiny” Coggins, III. Johnny is survived by his wife, Kathleen “Kathy” Coggins; his stepchildren: Kassidy Gunter, Kim Phillips, Ben Dabbs, David Depew (wife, Tina), Amanda Hall (husband, Buddy), Corinne Depew, Danae Sewell (husband, Jonny) and Ryan Depew (wife, Megan); and many step-grandchildren. Visitation will be held on Friday, July 9th from 1:00 p.m. to 3:00 p.m. at the Travelers Rest Funeral Home followed by Funeral services at 3:00 officiated by Chaplin Brian Bailey.

The family of Johnny Marion Coggins Jr. created this Life Tributes page to make it easy to share your memories.

Johnny Marion Coggins, Jr., known to some of his family and friends...

Send flowers to the Coggins family.