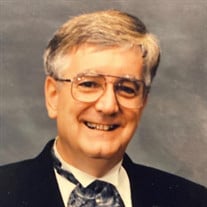 Kenneth Raymond Bridwell, age 73, of Travelers Rest, SC, passed away on Tuesday, August 4, 2020 from complications related to COVID-19. Born on September 14, 1946 in Greenville, SC to Grady Hampton Bridwell and Thelma Hawkins Bridwell, he was the oldest of three children. Ken graduated from Parker High School where he was senior class president and had eyes only for Miss Terry Bolick, his high school sweetheart and future bride. Ken went on to Furman University where he earned a Bachelor of Arts cum laude and served in the ROTC. He later earned a Master’s in Accounting from The University of Georgia and served as 2nd Lieutenant in the National Guard. Ken and Terry Bolick Bridwell married on April 11, 1968 and shared 52 years together and have two daughters and three grandchildren. Professionally, Ken worked as a CPA for Robert E. Marvin and Associates Landscape Company in Walterboro, SC then as a CPA at Graves Electric Company in Greenville, SC. He spent the last part of his career working as the Assistant Treasurer at his alma mater, Furman University. Ken balanced his career with loyal service to his church, Berea First Baptist, for over four decades where he served as a long-time youth ministry volunteer and Sunday school teacher. He also found great joy as a volunteer with Odyssey of the Mind, a club where students develop creative problem-solving skills and compete against other teams, at Northwest Middle School and Travelers Rest High School. Under his leadership, Ken’s teams often earned the right to travel to national competitions. Though many will remember him for his intelligence, deep convictions, and leadership skills, Ken was also loved for his sense of humor which could be characterized as goofy with a healthy dose of sarcasm and boyish mischievousness. He never seemed to be in short supply of contraband snacks, candy and fireworks, especially when his grandchildren were visiting. Ken was a loving husband to Terry Bolick Bridwell, devoted father to Allison Bridwell Leaver (husband Erik) of Silver Spring, MD and Shelley Bridwell Noble of Atlanta, GA and an adoring grandfather to Reilly Allison Leaver, Logan Charles Leaver, and Matthew Joseph Noble. He is also survived by his brother, Ronald “Ronnie” Bridwell (wife Sandra), and his sister, Karen Bridwell Timmerman (husband Michael), and was predeceased by his wife Terry Bolick Bridwell, and his parents, Grady Hampton Bridwell and Thelma Hawkins Bridwell. A private graveside was held for immediate family on Friday, August 7, 2020 at Mountain View Memorial Park, Travelers Rest, SC. The family has tentatively scheduled a celebration of life service for April 11, 2021 which would have been Ken and Terry’s 53rd wedding anniversary. In lieu of flowers, the family requests that donations be made “In Memory of Terry and Ken Bridwell” to the Greenville Tech Foundation to support Greenville Technical College Culinary Arts Program. Family and friends are encouraged to post pictures, stories, and fond memories of Terry by visiting her online memorial at: https://www.mykeeper.com/profile/KennethBridwell/

The family of Kenneth Raymond Bridwell created this Life Tributes page to make it easy to share your memories.

Send flowers to the Bridwell family.