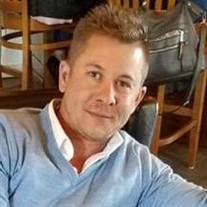 Matthew Stephen Ford, 35, of Taylors, SC, passed away unexpectedly on Friday January 31, 2020 at his home. Matt was born in Simpsonville, SC on November 22, 1984 to William Ford and Carole Compton Ford. He owned and managed Ford’s Tree Service, which served clients across the Upstate of SC. He had a lot of experience in landscaping, remodeling, and painting. If he didn’t know how to fix it, he would figure it out. On December 16, 2008 he welcomed his daughter, Marilyn Kate Ford, who meant the world to him. The two were best buddies. Matt was a devoted, single father and took Marilyn everywhere with him. He loved the outdoors: hiking, biking, and camping. He was probably the most well-dressed man you’d find in a tree or covered in dirt. He enjoyed hard work, fine dining, riding his motorcycle, martial arts, and dad jokes. He was kind and took great care of his employees. He was always willing to help family and friends. He didn’t take himself too seriously, often flew by the seat of his pants, and loved to laugh. He was loving, thoughtful, generous, charming, persuasive, creative, driven, silly and had a contagious smile and unforgettable smirk. His absence is felt deeply in the hearts of his family and friends and he is missed beyond words. Matt is survived by his daughter, Marilyn Ford; his father, William Ford; his siblings, Amy Ford Hall & Michael Hall, John Ford & Bethel Ford, Ann Ford, and Benjamin Ford; and his nieces & nephews, Hunter Marshall, Katelyn Marshall, Adam Hall, and Lily Ford. He is preceded in death by his mother, Carole Compton Ford. The family will receive friends Tuesday, February 11th, 2020 from 12:00 PM to 2:00 PM at the Remembrance Chapel of Woodlawn Memorial Park with Funeral Services immediately afterward at 2:00 PM in the Remembrance Chapel of Woodlawn Memorial Park.

Matthew Stephen Ford, 35, of Taylors, SC, passed away unexpectedly on Friday January 31, 2020 at his home. Matt was born in Simpsonville, SC on November 22, 1984 to William Ford and Carole Compton Ford. He owned and managed Ford&#8217;s Tree... View Obituary & Service Information

The family of Matthew Stephen Ford created this Life Tributes page to make it easy to share your memories.

Send flowers to the Ford family.