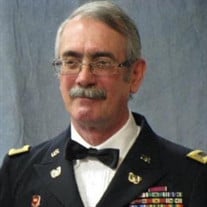 Robert George Brown, 73, of Travelers Rest, SC, passed away Monday, August 30, 2021. Born in Burlington, Vermont, he was the son of Walter T. Brown and Olive O'Brien Brown. He was a retired career military veteran in the United States Army. Robert is survived by his wife of almost fifty years, Christine Brown, two children, Kerstin Wells and Alexandra Fulmer, two son-in-law’s, Matthew Wells and Philip Fulmer and three granddaughters, Sydney Fulmer, Sophie Fulmer, and Daniella Wells. Robert served his country proudly for thirty two years as an Engineer in the U.S. Army. During his military career, he did many overseas tours to Germany and Alaska. He was also a veteran of Operation Desert Storm and Desert Shield. In the year 2000 he retired as a Chief Warrant Officer 4. Of course retirement wouldn’t keep him home for long. He went to work at a car dealership in Fairbanks, Alaska. He worked there first as a service advisor and then as a shop manager. In 2010, Robert and Christine retired for good and moved to Travelers Rest, SC. He enjoyed spending time in his wood working shop building toys for his granddaughters, bird houses, signs, and a multitude of other creations for family and friends. Anyone that knew Bob knew he loved to tell stories about his life. Anything from when his brother caught on fire and still went to school, when he convinced a military unit that they built an office for him when in fact they did not and when he took his unit on a run for his 50th birthday in Alaska in February, but didn’t tell them there would be buses waiting at the halfway point. Besides spending time with his wife, he loved spoiling his three granddaughters anytime he would visit them or they would visit him. He loved to see them smile and be happy. Visitation will be held Tuesday, September 7th, 2021 from 2:00 PM to 3:00 PM in the funeral home with funeral services at 3:00 PM in the Chapel.

The family of Robert George Brown created this Life Tributes page to make it easy to share your memories.