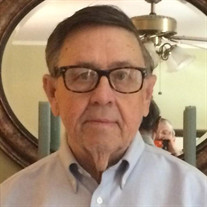 Samuel Luther Benson, of Travelers Rest, SC, died Monday, January 4, 2021 at the age of 78. He was born in Greenville County, SC, 8 Aug 1942. He was the son of the late Frank Fulton Benson and the late Virginia Recil Buchanan. He was a Class of 1960 graduate of Travelers Rest High School, where he was active in student government. He served with the U.S. Army’s 549th Military Police Company, Fort Davis, Panama Canal Zone, 1964-1965. He began work in 1960 for Stone Manufacturing and had a career of nearly 40 years in the Upstate before retiring in 1998. Sam served as Song Leader of Cross Plains Baptist Church for 37 years; as Vice President, South Carolina Singing Convention, and as Secretary/Treasurer, North Greenville Singing Convention. A Founding Charter Member and Founding Board Member of the Travelers Rest Historical Society, he served as Museum Docent and was active in storytelling events. He also was an active member of the Upcountry Friends historical association and enjoyed playing softball for work and church leagues. Sam loved family, history, fishing, singing, horseshoes, and Wednesdays at the Pickens Flea Market. He was a lifelong member of the Travelers Rest community. In the fall, the City of Travelers Rest issued a Proclamation declaring 18 September 2020 as Sam Benson Day. He was predeceased by his parents, his brothers Roland J. Benson and James B. Benson, and his nephew Tim Kidd. He is survived by his sister Beth Benson Kidd of Tullahoma, TN, and his sister Nancy Benson Evatt of Seneca, SC, and beloved cousin Helen Iler Gravley and her family of Travelers Rest, SC. He also is survived by niece Sandra Kidd of Atlanta, GA, nephew Gary Kidd and wife Tammie of Tullahoma, TN, and nephew John Evatt and wife Janet of Seneca, SC, and their families. The family wishes to thank the staff at River Falls Rehabilitation and Healthcare Center in Marietta SC and Traditions Hospice of Greenville for their compassion and care. A private graveside service will be held Wednesday, January 6, 2021 at New Liberty Baptist Church in Travelers Rest, SC, with burial immediately following at the New Liberty Baptist Church Cemetery. No flowers will be accepted. In lieu of flowers, memorial gifts may be directed to Traditions Health Hospice of Greenville, 10 Enterprise Blvd, Suite 202, Greenville SC 29615.

Samuel Luther Benson, of Travelers Rest, SC, died Monday, January 4, 2021 at the age of 78. He was born in Greenville County, SC, 8 Aug 1942. He was the son of the late Frank Fulton Benson and the late Virginia Recil Buchanan. He was a Class... View Obituary & Service Information

The family of Samuel L. Benson created this Life Tributes page to make it easy to share your memories.

Send flowers to the Benson family.