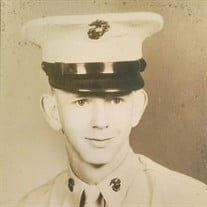 Stephen McCord Brown died at his home in Taylors SC on January 21, 2018. He was 75 years old. He was born on January 28th, 1942. He is predeceased by his parents James Milford and Elizabeth McCord Brown. Stephen is survived by his Son Steven Paul Brown, two daughters Cheri Lynne Banks and Kristen Ventress and by six Grandchildren. He is also survived by long time caregiver and dedicated family friend, Meredith Faken. Stephen attended Augusta Circle Elementary school, Greenville Junior and Senior High School where he graduated in 1960. He was a United States Marine Corps Veteran in which he served 4 years. Stephen worked at NCR Corp. as a Medical, Educational and Governmental sales specialist of mainframe computers until June 1974 when he was paralyzed due to a diving accident. Stephen then attended both Clemson University and the University of South Carolina where he graduated in 1978 with a Bachelor degree in Psychology. He was able to lead an active life with the use of a powered wheel chair and an adapted van Stephen went on to serve five years as a member of the South Carolina Building code counsel for the implementation of ADA requirements and attended as a delegate for the State of South Carolina to the White House conference on the Handicapped. Stephen also served as a representative of the disabled community on many advisory boards He had always had an entrepreneurial spirit. Before and after his accident he bought and sold antiques and fine collectables. After his accident, he started several businesses that came from his early interests. He started Carolina Gems and Minerals, in which he sourced and sold rare and collectable specimens to the Smithsonian Institute, the Virginia Polytechnic Institute and State University, popularly known as Virginia Tech. He also donated rare stones to Furman University. Stephen donated several major pieces to both Furman and Bob Jones geological departments. He created the Floral Business Forget Me Knots from a street side stand to a full service floral shop. He was an avid reader and spent many years researching the McCord-Brown family genealogy going back to the American Revolution. Funeral services will be 2:00pm Friday at the Remembrance Chapel of Woodlawn Memorial Park, Greenville, SC.

Stephen McCord Brown died at his home in Taylors SC on January 21, 2018. He was 75 years old. He was born on January 28th, 1942. He is predeceased by his parents James Milford and Elizabeth McCord Brown. Stephen is survived by his Son Steven... View Obituary & Service Information

The family of Stephen M. Brown created this Life Tributes page to make it easy to share your memories.